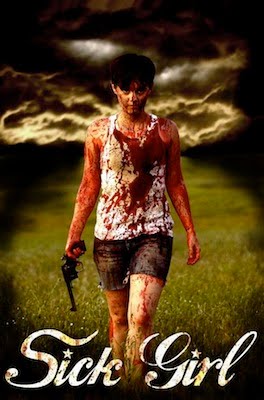 Say hello to Izzy. Then say goodbye.
"There's nothing wrong with hurting things smaller than you, providing you also take on things bigger than you. Cowards, lying in wait for weak prey. Bullies. You make me sick."
— Izzy
Advertisement:

Sick Girl is a 2007 horror film, and a sample of a great many Horror Tropes. Plus some terrible acting. Plenty of Nightmare Fuel.

Izzy, the heroine, is a young woman of indeterminate age raising her 9-year-old brother, while her older brother has been away at war for the past four years, without one visit home, nor any confirmed contact with anyone but Izzy. The movie opens with Izzy boarding a public school bus (which is inexplicably driven and monitored by nuns) briefly before Christmas, though the entirety of the film takes place in rural desert. Two girls in the back giggle and laugh at Izzy, who is dirty and not wearing the uniform, while one takes off her panties and tosses them out the window for her boyfriend, who is driving along behind the bus, to find. Izzy knocks a nun down and pees on her, and is ejected from the bus. The boyfriend and his friend come across Izzy and stop a minute later. The obese friend exits the car, hoping to score with Izzy. Shit gets real. This is followed by an incomprehensible plot with lots of explicit gore and violence of every type.

Not in any way related to Ill Girl, or the Masters of Horror episode.