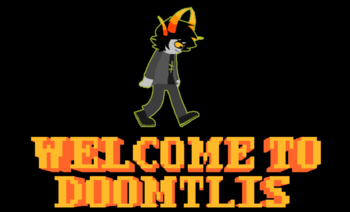 Avlesi, one of the twelve main characters.
"Welcome to Doomtlis a place where weirdness is the most important thing for us"
— The comic's description.
Advertisement:

is an Elsewhere Fic of Homestuck created by Mr. Tsuyo. It centers around a planet named Doomtlis, an Expy of the planet Alternia. On the planet Doomtlis, your worth is not determined by your blood color, but your mutation. Every single troll on Doomtlis is born with a mutation, and these mutations range all across the board from good to useless. On the planet Doomtlis, there are 12 trolls waiting to play a special video game called Novterra. But as it turns out, fate might have more in store for them than just that...

Tropes found in Welcome to Doomtlis include...