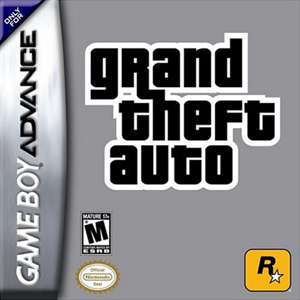 The lesser-known member of the Grand Theft Auto family.
Advertisement:

Grand Theft Auto Advance (as named on the title screen; the box art simply calls it "Grand Theft Auto") is a 2004 Grand Theft Auto title released exclusively on the Game Boy Advance. Notably developed with little to no involvement by Rockstar North, but by Digital Eclipse, the game is an eclectic mix of top-down gameplay from early 2D GTAs and stylistic design and gameplay elements from contemporary GTA games, with other unique features, such as speed indicators and significant variance in on- and off-road performance, added into the mix. The game is also the first GTA (set in the 3D Universe, anyway) to be released on a handheld console, predating its prequel Grand Theft Auto: Liberty City Stories.

Taking place a year before Grand Theft Auto III, the game's plot begins with Mike and Vinnie, two Liberty City criminals, seeking to leave the city and retire from their mob life with what money they have earned from several small-time jobs. Before their planned departure, Vinnie convinced Mike to do one more job for the Mafia, during which he is apparently killed in a car bomb, talking the duo's money with it. The game then centers on Mike's quest to seek out those who have killed Vinnie, working for multiple Liberty City underworld bosses for clues.

Advance was originally conceived as a GBA port for III, before Digital Eclipse settled on the idea of a new Prequel storyline for III. However, the game's technical issues stemming from the limitations of the GBA (mainly its classic but still clunky top-down gameplay, choppy 3D graphics, and content downgrade), poor publicity, and its near-simultaneous release alongside big-hitting Grand Theft Auto: San Andreas, led to the game being poorly-received and falling into obscurity. To this day, none of the characters unique to the game or any plot development in the game are ever acknowledged in succeeding GTA games, and the game itself is very much non-existent in the eyes of the official developers.

Although the official GTA website makes no mention of this game, its official website is still hosted in the Rockstar Games' domain here