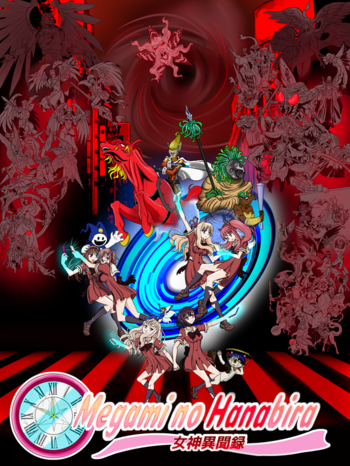 Sono Hanabira ni Kuchizuke Wo (A Kiss for the Petals) is a fluffy Yuri Eroge series, in which the biggest issues facing the characters are at worst an argument and/or the threat of a break-up. Shin Megami Tensei is a dark JRPG series, in which the regular issues the characters have to deal with are demon outbreaks, the end of the world, and a Forever War between a tyrannical God and a Devil who wants nothing but unrestrained anarchy.

takes the characters of the former and places them in the situations of the latter.

Written by Krimzon Flygon, Megami no Hanabira details the adventures of Mai Sawaguchi, her girlfriend Reo Kawamura and their friends Nanami Oda, Yuuna Matsubara and Sara Kitajima, as they try to survive an outbreak of demons in their home city. Aiding their efforts are 'Cypher', the mysterious Demon Summoning Program, which allows them to recruit and use demons of their own for protection, and a decidedly shadowy organization of Angel-wielders known as the Flock, who may have more to do with the present situation then they are letting on...

Megami no Hanabira Contains Examples of: