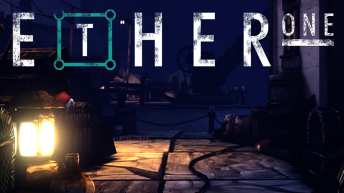 Ether One is a first-person Indie Puzzle Game, released in April 2014. You play as the unnamed Restorer at the Ether Institute, a futuristic mental health clinic. Your job is to heal dementia in patients by immersing yourself into the patients’ subconscious in order to find the source of the illness and eradicate it.
Advertisement:

The game is set in the small English mining town of Pinwheel, as remembered by Jean Thornton, a retired schoolteacher and the Restorer's current patient. You restore the patient’s memories by exploring the town in first person, collecting red ribbons that represent lost memory fragments, which bring you closer to the patient’s "core memory." You can also restore 20 broken projectors by solving puzzles of occasionally maddening difficulty to bring the town back in line with the patient’s memories of it. Meanwhile your coworker Phyllis reminds you in voice over that the Insitute is in danger of shutting down if you don’t get some results, and a mistake on your part could render the patient’s condition irreparable. No pressure...

Ether One provides examples of the following tropes: