Podcast / It Makes A Sound 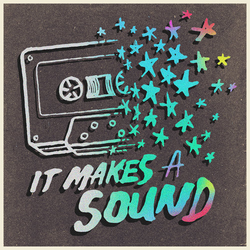 Remember Wim Faros.
It Makes a Sound is a serial fiction Podcast from the Night Vale Presents network, written by and starring Jacquelyn Landgraf as Deirdre Gardner, a nostalgic childhood fan of local musician Wim Faros, who uses her amateur radio show to wax rhapsodic over his life and work in the hopes of revitalizing Rosemary Hills, the podunk, declining hometown where they both grew up.
Advertisement:

Sound airs biweekly on Sundays beginning September 24th, 2017 and can be found on iTunes

website. An official soundtrack album featuring authentic cast performances of all the songs was released January 2019 to iTunes, Amazon, and Bandcamp.

The second season of the show, independently produced by Jacquelyn Landgraf, began May 8th, 2022