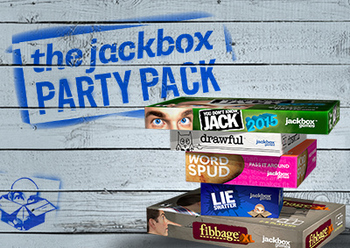 Room Code:
TROP
Join on your phone at Jackbox.tv

The Jackbox Party Pack is a series of collections of games created by Jackbox Games. Each game is unique in that instead of using a traditional controller, everyone plays using their cell phones, tablets, or computers. There are currently six games in the series, each with five games included:

In addition to the above, there is the standalone Drawful 2 note 3-8 players. Adds the ability to use two colors, censor answers that players may find offensive, and create your own prompts., and a standalone version of Fibbage XL and Quiplash.

Note that tropes pertaining to You Don't Know Jack 2015 and Full Stream belong on their series' page.