Mostly consisting of game announcers and playable characters, with some exceptions.

Keep in mind, some characters have crossover with You Don't Know Jack. Most notably, Cookie, the host of the Fibbage series and Fakin' It; Schmitty, the host of the Quiplash games and Lie Swatter; and Billy O'Brien, Cookie's ventriloquist puppet who appears in Monster Seeking Monster, with cameos in Split the Room and Joke Boat.

Greg is the boss of Bomb Corp, a company specialised in making Bombs, but they are very disorganised.

This is your wake-up call. PREPARE TO DIE!
Voiced by: Spencer Ham
The serial killer who kidnaps the player characters and forces them to play his twisted trivia game, allowing only one player to survive.

A "licensed physician of the mystical arts" who appears to players who escape under the effects of Grandpappy Jack's glasses to help cure them of the curse of "supernatural madness".

A no-nonsense homicide detective who shows up to interrogate the player if they escape holding Grandma Despair's Knife.

A bomb squad officer on his last day on the job... a day that involves helping out players who escape with Cousin Clive's Time Bomb still strapped to their body.

An exorcist who is called in if the winner is holding Auntie Vale's Hand Mirror, charging the other players to exorcise the winner.
Tee K.O.

Voiced by: Shawn Bowers
The somewhat eccentric master of T-Shirt Island, and host of the tournament.

A collection of Youkai all entering into the T-Shirt Tournament.
Monster Seeking Monster Characters

Voiced by: Erica Elam
The hostess of Monster Seeking Monster, who explains the rules and the various monster powers.

...and their true forms, each with a different game function.
Advertisement:
Split the Room

Meow. Do not be startled. I am here to guide you as we explore the deepest recesses of your mind.
Voiced by: Tim Sniffen 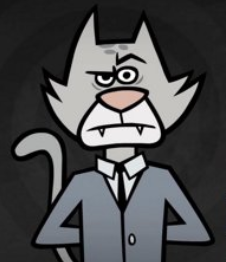 One of Cookie's cats has his own game show now. And he puts a lot of work into it.
The feline host of Split the Room, who presents players with various scenarios and encourages them to make them as strange and divisive as possible.
Mad Verse City

Voiced by: Simeon Norfleet
The host of Mad Verse City, along with his assistant DJ Raych.

A bunch of deadly robots engaging in rap battles.
Gene

The computer player if spots are missing in Survive the Internet, Patently Stupid and Mad Verse City.
Joke Boat 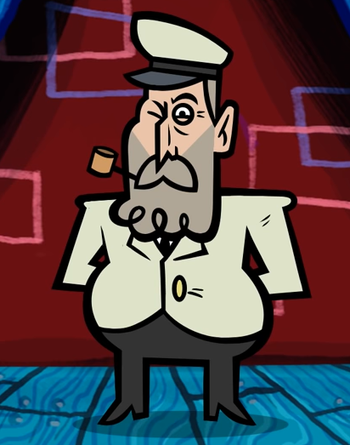 When he's the one running the ship, you can rest assured it's all downhill from here.
Captain of the cruise ship Sea Minus and host of Joke Boat, whose credentials are just as questionable as the vessel he runs.
Push the Button

The intrepid voice that tries to save an interstellar mission.
D.O.D.E. is the AI that is running the sleeper ship that the humans occupy in Push the Button.
Advertisement:
Job Job 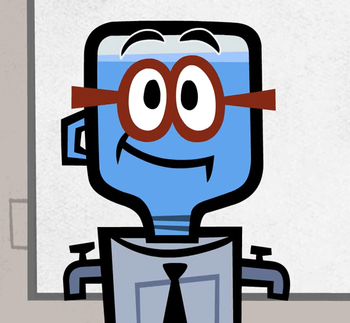 This drip is eager to have you on their team.
M. Bubbles is the boss of the office in Job Job.
Weapons Drawn

A faceless, nameless entity who oversees the killing game from the shadows, awarding the detectives points for committing murders (especially if they don't get caught) and having good accomplices.

Narrator: If you want to know what I look like for this TV Tropes page, imagine the living embodiment of... betrayal.

The gracious host of the party that unfortunately just so happens to be the setting the detectives chose for their game. He awards points for successfully solving murders.
The Wheel of Enormous Proportions

The Wheel of Enormous Proportions 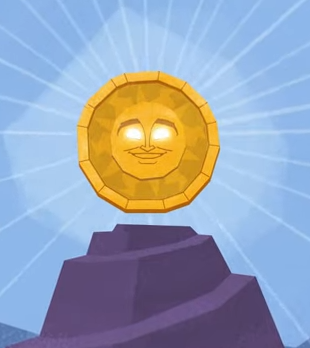 The wheel in the sky keeps on turnin'...
A gigantic wheel that has turned its legendary ability to answer questions into a game show.