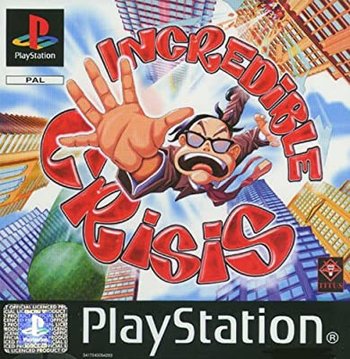 Our hero, ladies and gents.
Advertisement:

Incredible Crisis is a 1999 Minigame Game for the PlayStation, developed by Polygon Magic and published in Japan by Tokuma Shoten (as Tondemo Crisis!) and by Titus Software in the U.S. and Europe. A simplified Arcade Game version was released in Japan by Tecmo.

The Tanamatsuri family is trying to get home in time for a birthday party for the family matriarch, Hatsu. But all sorts of crazy events conspire to make this harder than it seems. The game follows the other four family members through their day, and all the craziness they run into. Among other things: