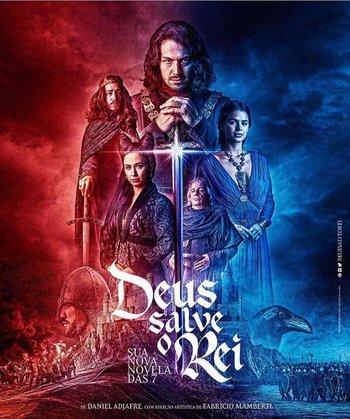 Deus Salve o Rei (English: God Save the King) is a Brazilian Soap Opera produced by Globo in 2018 following the success of series like Game of Thrones and Vikings.

The series takes place in a fantasy region known as Cália, home to the two kingdoms of Montemor and Artena that for many years have lived in harmony sharing natural resources with each other: Montemor provides precious ores while Artena lends water, which is highly scarce to the former. Queen Crisélia of Montemor tries to circumvent their dependence on Artena by building an aqueduct to a lake, which dries up on its inauguration day much to their embarrassment. She sends her grandson Afonso, the heir of Montemor's throne, in search of an alternate source of water for their people but during the expedition, his group is attacked by outlaws and the prince is presumed dead. His life is saved by Amália, a farm girl from Artena, and the two fall in love with each other. A crisis between the two realms begins when Montemor's heir goes missing with his younger brother Rodolfo being forced to become king despite being completely unprepared, while Princess Catarina of Artena, the king's daughter, plots to gain more influence over its neighborhood specially in the company of Constantino of Vincenza, a foreign nobleman that shares her ambitious views.

Are you going to Scarborough Fair?
Parsley, sage, rosemary and thyme
Remember me to one who lives there
For once he was a true love of mine