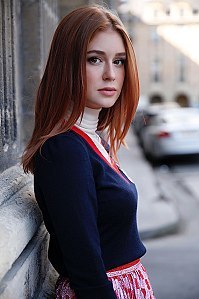 Marina Souza Ruy Barbosa Negrão (born June 30, 1995 in Rio de Janeiro, Brazil) is a Brazilian actress. She started off her career as a child actress; her first major role was in the telenovela Começar de Novo. In 2006, she portrayed a prominent character in Silvio de Abreu's Belíssima. She later appeared in Sete Pecados (2007), Escrito nas Estrelas (2010), Morde & Assopra (2011), and Amor à Vida, interpreting Nicole, a young orphan and millionaire who gets cancer, Hodgkin's lymphoma type 4.

In her adult career, she gained great prominence in the telenovela Império, playing the nymphet Maria Isis, thus winning the Contigo Television Awards for Best Supporting Actress. In 2015, she starred in Totalmente Demais — a show that earned an International Emmy for best telenovela.

Barbosa has become a style reference, being a constant presence in the lists of the most elegant women in Brazil. Her red hair is considered her trademark.

She is in big demand to make advertising campaigns, especially in the fashion and beauty segments. She was the celebrity with the second most appearances in commercials aired on broadcast television in Brazil between May and July 2015, and was named one of the Top 25 Celebrities of Brazil in 2015, according to Forbes magazine, the Brazilian edition. In 2015 she was the ninth Brazilian celebrity to appear the most in television ads, according to the ranking of the Competition Control, which monitors the advertising market.

Barbosa’s social media following is also massive, especially on Instagram, where she has more than 30 million followers.