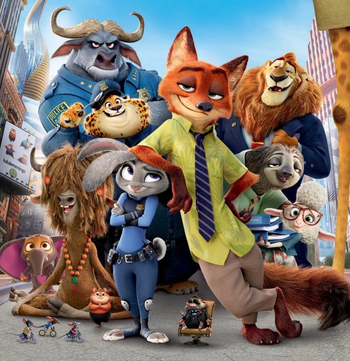 In Real Life, there are many species that theorists have speculated can evolve over time into something of comparable sentience and intelligence to humans. Not all of them are mammals.

This trope can occur for many reasons. The designers might find humanoid reptiles or birds too weird looking or hard to draw. Or possibly, they also being mammals, just prefer mammalian animals or are more familiar with how mammals work. Another reason for this might be a way to avert Carnivore Confusion. Instead of having Vegetarian Carnivores or having characters eat meat without explanation as to where it's from, instead it's implied (or outright shown) that they eat non-anthropomorphic birds or reptiles.

This trope is sometimes subverted by throwing a token bird or reptile into the mix.