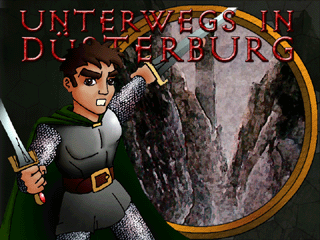 You wake up outside, in a forest, with no memory of what happened. The only things you know are your name, the name of your dog and that you came through that eerie fog bank right behind you. After walking around for a bit you arrive at a house and find an old man. He tells you his life story of having been thrown off his throne as a duke by a vampire.

Implausible, you say? Not if you're playing Unterwegs in Düsterburg

(On the road in Düsterburg), a free German RPG Maker 2000 game released in 2003. While its plot is relatively clichéd, it ties its elements together neatly, and is prized in the German RPG Maker community for its production values, witty dialog and atmosphere.

Largely due to the RPG Maker engine, the game displays a mix of Western and Eastern RPG elements, being vaguely set in the European Middle Ages with vampires, orcs etc., but also featuring Magitek, a turn-based battle system and relatively linear progress.

A remake for RPG Maker VX Ace is in the making since 2012. Among other things, it's intended to include an English translation.

Unterwegs in Düsterburg provides examples of: