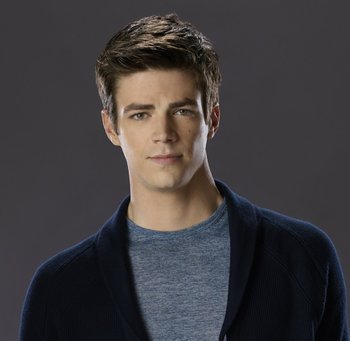 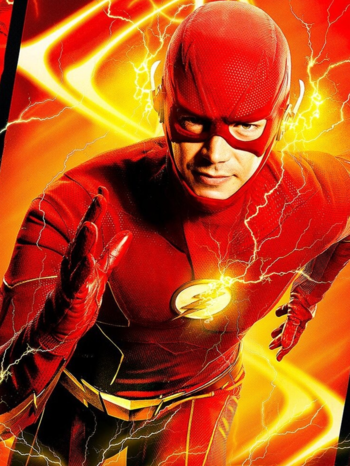 "My name is Barry Allen, and I am the fastest man alive!"
Click here to see Barry in his first Flash outfit. 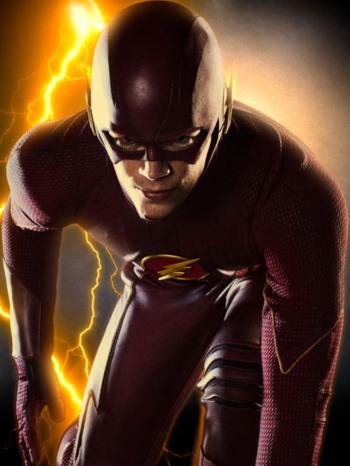 "Every kid dreams about being a superhero. Having powers, saving people. But no kid thinks about what it's like to be a hero and not saving people."
Click here to see Barry as the "Green Arrow". 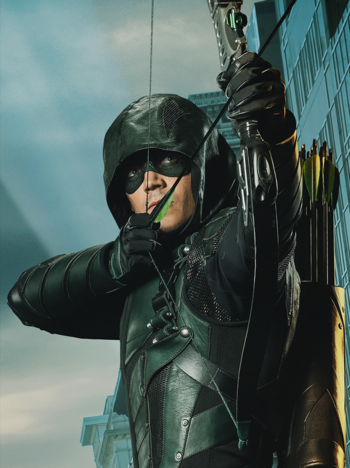 Nora: How do I fix this?
Barry: I don't know if you can, Nora. You made a mistake, you know? A big mistake. Sometimes in life, all we can do is just live with the consequences. So what you have ask yourself is... what kind of hero are you gonna be? One who takes a do-over after every mistake, or one who lives with it and moves forward?
— The Flash (2014), "Legacy"
Advertisement:

An assistant crime scene investigator in Central City with a habit of being late. After the murder of his mother by a "man in yellow" and his father being framed, he develops an interest (some say obsession) in "impossible" crimes and events. He first appears in-universe in the mid-season 2 two-parter in Arrow investigating a break-in by a thief who apparently has Super Strength, meeting Oliver Queen ("The Arrow" at the time) and his team.

After being struck by lightning, he falls into a coma and awakens as a "metahuman" with Super Speed. With his newfound powers, he becomes the superhero known as the Flash, fighting crime, finding other meta-humans, and bringing hope to Central City. He's assisted by Joe West, the man who raised him after his mother's death and father's subsequent incarceration, the two people who helped him in his comatose state - Cisco Ramon, a tech expert who later gains precognition and portal generation powers and becomes "Vibe", and Caitlin Snow, a physician who develops a surly second personality by the name of "Killer Frost" - and later his childhood friend (and the love of his life) Iris West, Joe's daughter, once she learns of his secret. Along with many more along the way.

Barry goes through many ordeals in his time as the Flash: being betrayed by his mentor Harrison Wells (who was, in fact, the man in yellow who murdered his mother), his acquitted father killed by a speedster from another Earth, nearly losing Iris to an evil version of himself from the future, framed for murder by a criminal mastermind who nearly subjected the entire planet to his whim, and meeting his and his now-wife Iris' daughter from the future, Nora West-Allen.

Soon after Nora ceases to exist due to the machinations of his greatest archenemy, he faces his own mortality with an impending Crisis and prepares his team for a life without him. However, after managing to escape his fate during Crisis, but at the cost of Oliver's life, Barry continues to fight ahead for his friends and family.