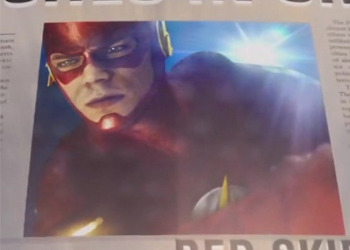 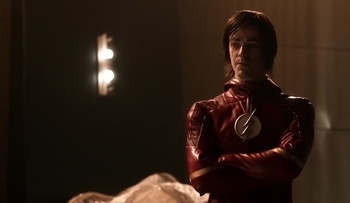 "I have to say, I'm really digging the brighter red suit." - Cisco

Barry from the original(?) timeline before the Reverse-Flash changed history. He became the Flash in 2020, the year the Particle Accelerator was originally completed. By 2024, he has married Iris West and become head of the CCPD's CSI division. He wears the classic Flash suit from the comics, complete with the golden lightning bolt on a white circle Chest Insignia. He did something that made him the mortal enemy of the Reverse-Flash, so much that the Reverse-Flash went back in time to try to kill him as a child, and Barry followed suit to try and stop him. What happened after he saved his younger self is unknown.

In Season Three of The Flash, present-day Barry travels to 2024 and meets his future self, but the timeline has been altered through his own meddling so this future Barry is not the same as the original.

However, one thing remains constant; no matter how many alterations the timeline goes through, as long as the Flash exists, he is destined to disappear in a "Red Sky Crisis" (which will happen regardless of Barry's presence) on April 25th, 2024. What happens to him after that is not yet revealed, except one thing — he never comes back!

At least that how it was! Barry's daughter Nora West-Allen had never known her father and wanted to stopped his disappearance. Her attempts to stop that however had consequences that nobody could foresee, the date of Barry's disappearance being moved up five years to 2019!

A renowned journalist and Barry's wife from the original(?) timeline before the Reverse-Flash changed history.

Iris' brother and a fellow speedster. In Season 3, who was crippled by Savitar.

A genius engineer working for S.T.A.R. Labs and The Lancer of Barry Allen.

A renowned novelist originally from Earth-19.

An ice-based metahuman who was once Caitlin Snow, The Medic of Team Flash.

A former forensic scientist at CCPD.

A journalist who writes about Barry's fateful battle against Eobard Thawne.

Wally's caretaker after his Career-Ending Injury.

The former second half of Firestorm and a former original member of The Legends who left the team following the death of his partner, father figure and mentor Martin Stein. This version is from 2022, five years after Stein's death. He was recruited to help his previous team fight Mallus.

A colleague of Nora-West Allen.

A notorious criminal in Central City.

For tropes applying to his present day-self, see Arrowverse: The Rogues
Rosalind Dillon / The Top

A notorious criminal in Central City.

A duo of bank robbers.

Known Aliases: The Starling City Vigilante, The Hood, The Arrow, سهم (Al Sah-Him, Arabic for "The Arrow"), The Green Arrow

The future version of Oliver Queen after some meddling in the timeline. 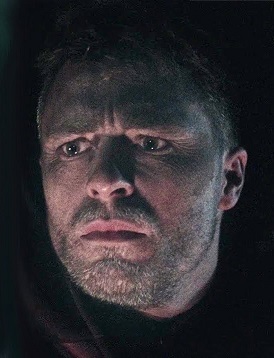 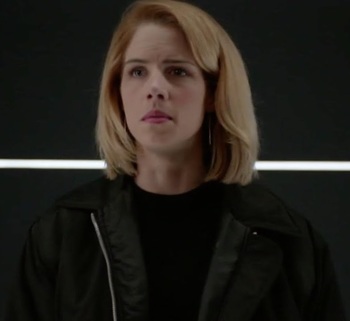 Former CEO of Smoak Technologies, and a former member of Team Arrow who lost her way by 2040.

Oliver's Number Two in Team Arrow and the father of Connor Hawke.

An Assistant District Attorney in Star City working as a superhero and Sara's older sister. She is long since dead by the time of the future.

Oliver's younger (half) sister and a member of Team Arrow. 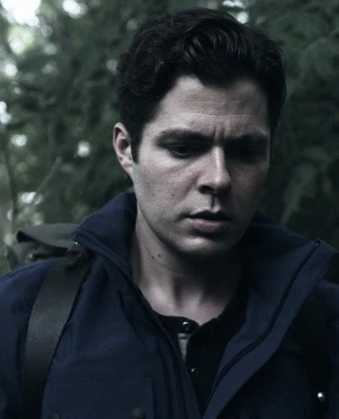 Oliver Queen's illegitimate son, who was sent away by his stepmother to avoid being targeted by his father's enemies, particularly Ricardo Diaz. In 2040, he seeks help from his father's former protegee Roy Harper in the ruins of Lian Yu. 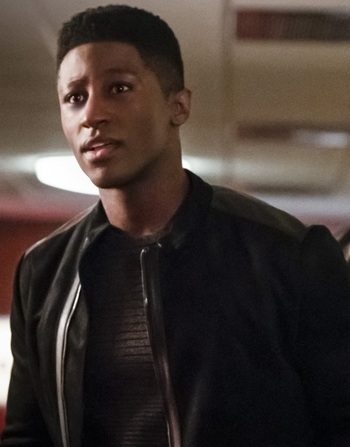 see Arrowverse: Other Earths for more info about the future version from Earth-16 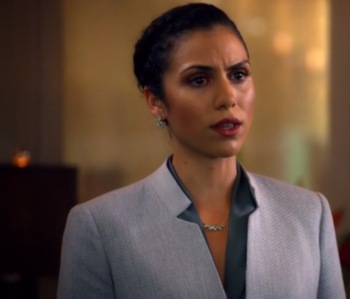 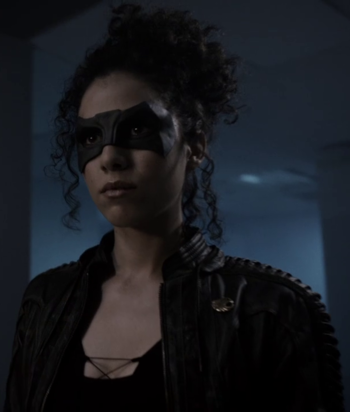 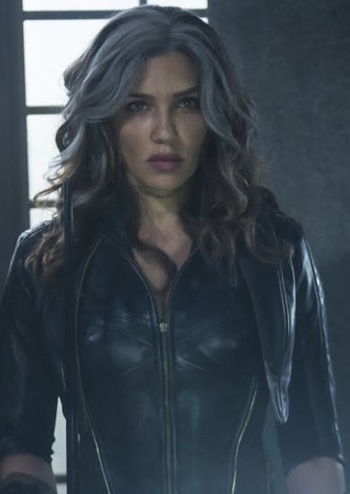 The former Black Canary, who is still an active vigilante and now the leader of the Canary network. 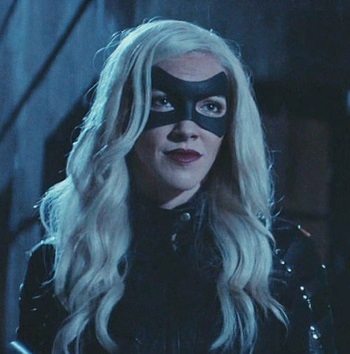 The Earth-2 counterpart of the late Laurel Lance, the original Black Canary. Formerly known as the supervillain Black Siren, she found the error of her ways and operated as the Black Canary on Earth-2. She is introduced helping Mia, as a part of the Canary Network. 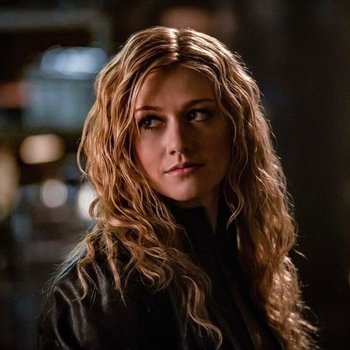 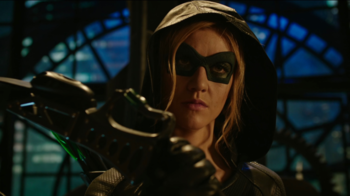 The daughter of Oliver Queen and Felicity Smoak, who became a vigilante known as Blackstar. Post-Crisis, she follows in her late father's footsteps as the next Green Arrow. 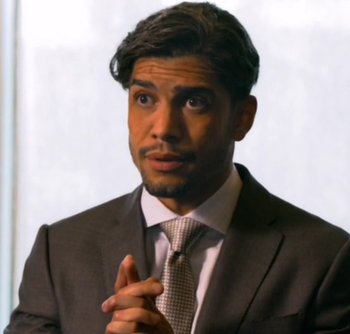 The mayor of the now independent Glades and former member of Team Arrow.

Slade Wilson's youngest son who is wearing a silver-colored version of the Deathstroke mask. He's the criminal ruler of Star City in 2046. 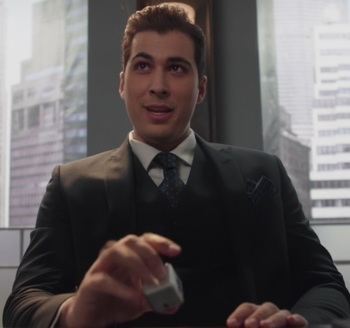 The CEO of Galaxy One and a prominent benefactor of Rene's candidacy as the mayor of the Glades. 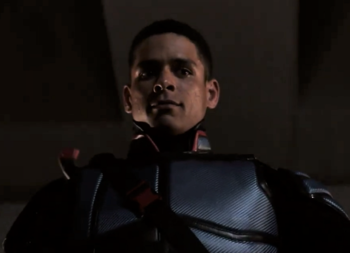 The son of John Diggle and Lyla Michaels, who joined Deathstroke's gang due to being frustrated at the high expectations his family placed in him. 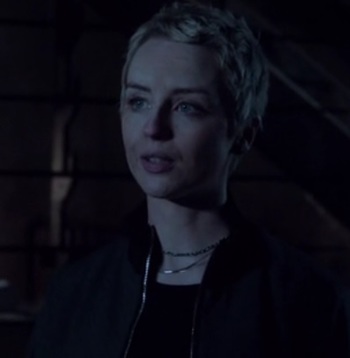 Felicity's former friend and co-worker at Smoak Tech, who sold the Archer program to Galaxy One.

An acquaintance of Barry Allen in the future and the creator of an iteration of his suit. He also designed the Flash ring to go along with it.

A supervillain known to have operated in Central City by the time Nora gained her powers.

Nora Dahrk
Damien Dahrk's orphaned daughter and a member of the Cult of Mallus who begins travelling time in 2039.
see the Arrowverse: Time Masters page

Father of Per Degaton and Chairman of the Kasnian Conglomerate, a major world power in 2147.

A tech genius and roboticist in 2147. She is a descendant from a long line of inventors.

Rip Hunter's late wife. She was previously a Time Master like her husband.

From An Unspecified Year and Decade

From An Unspecified Year and Decade