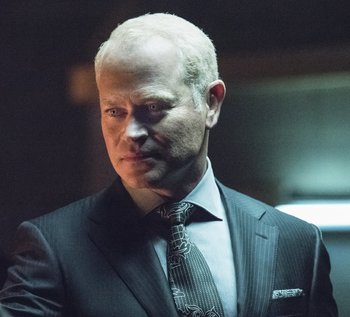 "You’re all fretting about this city dying. I'm here on behalf of an organization that wants you to let it die."

Affliations: The League of Assassins, The H.I.V.E, The Legion of Doom, The Cult of Mallus

"Nora's gone. It's just Mallus now. You must be enjoying this, seeing your nemesis with a broken heart."
"I didn't know you had a heart to break. Where was it the night you murdered my sister?"
"Look, what I did was unforgivable. But back then, I hadn't loved anyone to understand the pain that I caused. Not that it's any comfort, but if I could take it all back, I would."
— Damien and Sara Lance in "Guest Starring John Noble"
Advertisement:

The presumed leader of the H.I.V.E. organization. He was once a part of the League of Assassins, but when his ambitions got too great, he narrowly escaped execution and formed the H.I.V.E. along with water from the Lazarus Pit and a faction of the League. He possesses mysterious mystical abilities apparently originating from a blood ritual.

Green Arrow eventually killed him, but the Legends would end up fighting his past self as a member of Eobard Thawne's Legion of Doom, though things were ultimately put right. However, Darhk left behind a daughter, sweet kid really. But she grew up and learned all manner of dark spells in service of the demon Mallus. And eventually, Mallus declared that he wanted Damien Darhk back alive to serve him as well. After his resurrection, he also remembered everything his past self went through.

As fate would have it though, Damien came to realize the wrongness of his actions when he saw what Mallus did to his only daughter and decided to finally atone for his sins...