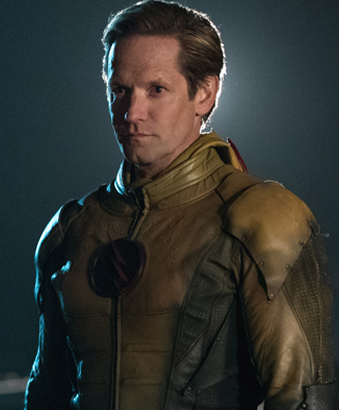 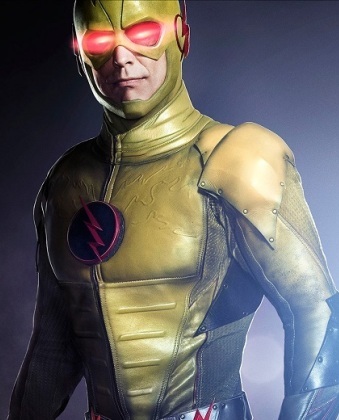 "Oh, I'm not like The Flash at all. Some would say I'm the reverse..."
Click here to see him as "Harrison Wells" 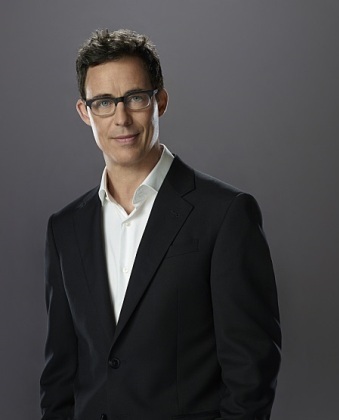 Click here to see him in his New Reichsmen costume 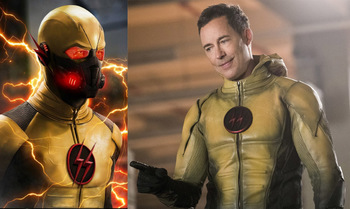 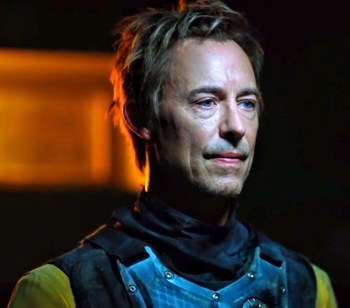 Known Aliases: The Reverse-Flash, "Harrison Wells", The Man in Yellow, "The Man in the Ball of Lightning", "Martin Stein", "Jack Swigert", Dark Flash

Affiliations: Team Flash, The Legion of Doom, The New Reichsmen

"We've been at this a long time, you and I, but I'm always one step ahead."

A scientist from the future who idolized Barry Allen to the point of obsession, wanting to be the Flash. Successfully recreating the accident in which Barry got his powers, he gained speedster powers similar to the Flash, including the ability to travel through time. However, when Thawne was about to make his grand entrance and be hailed as a hero, the Flash arrived and stole his greatest moment from him. Coupled with his discovery that he was destined to become the Flash's greatest enemy, the Reverse-Flash, Thawne lost his mind and took his rage out on his idol out of envy of not being who he is and decided he would be the greatest enemy he ever had and prove he is better. Eventually, he discovered Barry's real identity and traveled back to the year 2000 to murder him as a child. Barry got away, so Thawne murdered Nora Allen instead, framing her husband Henry for it. Unfortunately for him, in doing so, he caused a chain of events that stripped him of his powers and trapped him in the past. Murdering the founder of S.T.A.R. Labs and assuming his identity, he built the Particle Accelerator that gave Barry his powers years ahead of schedule and supposedly lost the use of his legs in the explosion when it malfunctioned.

After Barry got his powers, he and Joe reopened Nora's case, hoping to bring her killer to justice and free Henry. But unknown to Barry, he's still in Central City and keeping a close eye on Barry's loved ones, specifically as a scientist searching for metahumans who helps Barry understand his powers. Training Barry to get faster and use his powers, the Flash had no idea that the monster who killed his mother was hidden in plain sight...

open/close all folders
In General
Original timeline Thawne
Thawne: Almost two centuries from right now, we meet for the very first time. From my part, when I finally discovered ways to posses speeds, speeds faster than anyone alive and just when I was about to present myself to the world...{Sighs}... you showed up, perusing some stupid case and dazzled the crowd. "Ah, your dazzling" and then, and then you saved the crowd. A crowd that I was meant to save, a crowd that was meant to thank me, YOU STOLE my greatest moment. I admired you and you humiliated me. And it was at that exact moment that I knew I had to get faster than you.
Barry: (calmly) Only a sociopath would react to something so small, with that kind of rage.
Imposter Forgot One Detail: Thawne didn't know of Wells' friendship with Dr. McGee and indirectly caused her to suspect that he was not the same friend he was before the accident. She tells this to Barry, who needed more information on him for his secret investigation.
Flashpoint timeline Thawne (MAJOR SPOILERS FOR SEASON 8)

At the end of The Flash Season Two, Barry ran back to the night his mother got murdered and prevented Thawne from killing her, creating an Alternate Timeline known as Flashpoint. However after Barry is forced to restore the timeline, this Thawne manages to continue existing as a time remnant while being constantly pursued by the Black Flash on behalf of the Speed Force for his paradoxical existence. After finally being caught, Thawne was forced to serve penance as the guardian of a fixed point in time and prevent tampering by time travelers, where during this time he made a Heel–Face Turn and saw the error of his ways. His efforts led him to be killed, but he is rewarded by the Speed Force by being restored to the timeline in the present. This would paradoxically lead to the coexistence of two Thawnes simultaneously in the same time period.