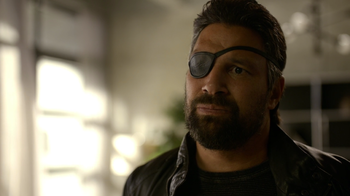 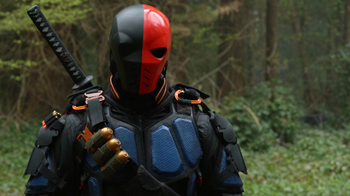 Species: Humannote Enhanced via Mirakuru from 2008 to May 2014

An ASIS agent sent to Lian Yu with his partner Billy Wintergreen to save Yao Fei, he was betrayed by Billy during the mission and left to fight against Edward Fyers alone, until Oliver washed up on the island. The two began a fight against Fyers in an effort to stop his plot and leave the island, but continued to become embroiled in conflicts and conspiracies that revolved around it.

Later, his and Oliver's involvement in these conflicts with the mad scientist Anthony Ivo got him killed, leading to Oliver injecting him with a "miracle" serum developed by WWII-era Japan called the Mirakuru. As a result, Slade came back to life with superhuman abilities, but went completely insane and tried to make Oliver suffer. He continues this crusade into Season Two's present day, where he becomes the main villain for that arc.

However, after a short return as a villain in Season 3, the effect of the Mirakuru slowly completely leaves his body and he comes to regret his horrible deeds. When Oliver asks for his help against Prometheus in Season 5, Slade willingly assists him, trying to atone for his crimes. Another Season later, Oliver returns the favour, with the two finally parting as friends again.