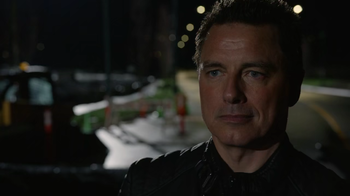 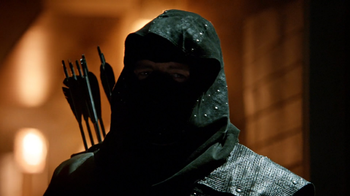 Affiliations: The League of Assassins, Tempest, Team Arrow, The HIVE, The Legion of Doom, The Thanatos Guild

"I found myself in a place called Nanda Parbat. I met a man there. He helped me make sense of things. He helped me to find a purpose for my life. To make this city a better place for everyone."
Advertisement:

Father of Tommy & Thea, CEO of Merlyn Global Group, former member of the League of Assassins, and leader of Tempest, a group of wealthy and powerful Starling City citizens plotting to "save" the city by destroying the Glades.

After Moira Queen tells the world he's a criminal, he goes underground after the (partial) success of the Undertaking and manages to manipulate events to put himself in charge of the League of Assassins and form an uneasy alliance with Team Arrow. However, his sins came back to haunt him as he loses control of the League thanks to Nyssa Al-Ghul and Oliver, and joins HIVE out of spite. However, when HIVE wants to destroy the world with no survivors, he goes back to Team Arrow to help save the world.

After he helped Team Arrow save the world from HIVE, he was approached by Eobard Thawne and Damian Darhk to join their organization the same night Oliver kills Darhk's future self. Having lost everything and thoroughly burned his bridges with Team Arrow, he accepts a chance to revive his fortunes and perhaps fix some old mistakes that keep haunting him, joining the Legion of Doom.

After he and the Legion are defeated by the Legends, he is returned to his crummy existence in the present. Just in time to come to Oliver's aid in the war against Adrian Chase who has kidnapped all of Oliver's friends and brought them to Lian Yu, including Thea. Partaking in the battle, Thea ends up stepping on a mine. To save her life, Malcolm takes her place then sets off the mine to take out Harkness and Chase's other goons.