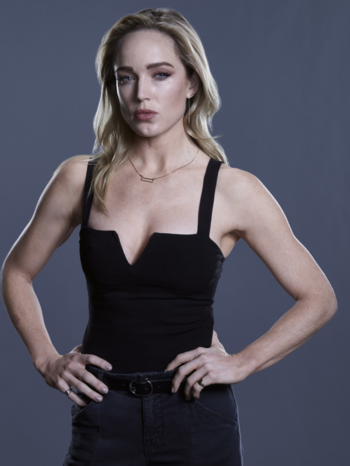 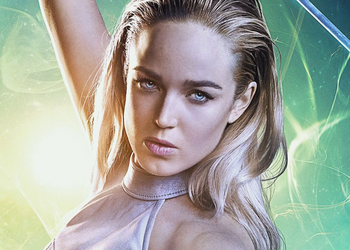 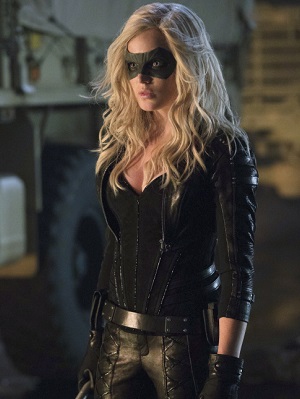 "Today is the day we earn the name "Legends"! Now... how do we sneak out the back?

Species: Human note Briefly empowered in 2018 via Death Totem and in 2020 after being struck by Atropos

Affiliations: The League of Assassins, Team Arrow, The Legends

"I was an assassin. I was dead, now I'm the captain of a friggin' time ship. One thing remains the same. I'm still a sore loser."
Advertisement:

The younger sister of Laurel Lance a.k.a. Black Canary. Sara was thought to have died on the Queen's Gambit when it sunk, she was actually rescued by the crew of the Amazo, where she became a reluctant participant in Dr. Anthony Ivo's experiments. She was later found and recruited by the League of Assassins, which she later left. After Malcolm Merlyn's attack on the Glades, Sara returns to Star(ling) City, becomes a vigilante known as the Canary, and reunites with Oliver and her family.

After being killed by Thea Queen (sedated and under Malcolm Merlyn's orders), then resurrected by the Lazarus Pit a year later, she joins Rip Hunter's team of "Legends" which he formed to kill Vandal Savage and prevent his reign of terror in the future. Before leaving, Laurel convinced her to go to deal with the bloodlust that she formed after reviving, giving her a new outfit and telling her to "be the White Canary". Unfortunately, just before defeating Savage for good, Sara went back home to her father, where she learned of her sister's demise at the hands of Damien Darhk.

When Rip Hunter went missing after a mission gone wrong, Sara was chosen by her teammates to lead them for the time being, which became permanent following Rip's return and then resignation. Leadership for her was difficult to maintain, as she attempted to confront Darhk at various points throughout history to kill him so she could save Laurel, as well as him joining a nefarious Legion with other time travelling villains. Ultimately, when restoring history with the Spear of Destiny, she was able to say goodbye to her sister and allowed Damien to live out his life until his death at the hands of Oliver Queen.

Afterward, due to creating a reality warping paradox by having the Legends travel back and time and warn themselves to prevent the Legion's victory, the Legends briefly disbanded only to discover anachronisms throughout time and a demon named Mallus who sought to escape his prison. After begrudgingly teaming up with Rip's new organization, the Time Bureau, and even starting a relationship with one of their elite members, Ava Sharpe, she and the Legends fixed their mistakes... only to create a new one.

John Constantine, the man who helped retrieve her soul after being revived, tells her that the Legends opened a rift that held magical entities called "Fugitives". With his own demons (literally and metaphorically) to deal with being tied into it, John decided to tag along and help them capture them. In the end, the Legends created "Heyworld", where the Fugitives could live in harmony with humans, changing the future for the better. However, a woman whom John condemned to Hell decided to resurrect its most evil and notorious souls throughout history, causing Sara and her team to once again fix what's been broken.