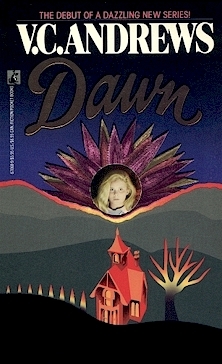 In her fine new Virginia school, Dawn Longchamp feels happy and safe, but nothing is what it seems. note Cover of the first US edition, by Myles Sprinzen and Richard Newton
Advertisement:

The Cutler series is a Generational Saga series of novels published under the name of V. C. Andrews, but written entirely by Andrew Neiderman, who had been chosen by her estate to write sequels for the Dollanganger Series and The Casteel Series. This was the beginning of a long, LONG line of ghostwritten series.

In Dawn, Dawn Longchamp's life is changed dramatically and not entirely for the better when she is identified as a daughter of the wealthy Cutler family who disappeared as an infant. Two sequels continue her adventures, followed by one featuring her daughter Christie, and a prequel focusing on Lillian Cutler, the main antagonist of the first two novels.