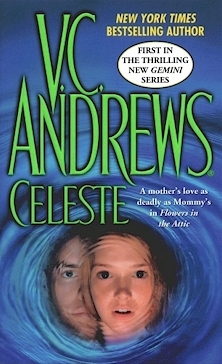 He was her mirror image. Now the mirror has cracked. (Cover of the US edition, by Lisa Falkenstern)
Advertisement:

Celeste is a novel published under the name of V. C. Andrews, but written entirely by the ghostwriter who had previously written sequels to several of Andrews's novels. It is the first novel of the three part Gemini series which is better known as the Celeste series.

Twins Celeste and Noble Atwell have always lived alone, away from town, with their strange spiritualist mother, who raises them to believe in signs, omens, and fate. Celeste has always resented their mother's obvious favoritism of Noble...but when Noble dies unexpectedly, Mama pretends that nothing's wrong. Instead she forces Celeste to dress as Noble, act like Noble, believe she's Noble, until Celeste can almost feel her brother's ghost in her head, trying to take over her body. She fears she's going insane.

Struggling to retain the last vestiges of her true self, while also feeling the first stirrings of adolescence, Celeste becomes intrigued by the happy, carefree children across the river, particularly handsome troublemaker Elliot. Celeste no longer wishes to keep her shameful secret, but her brother's ghost seems to be holding her back, warning her to stay away. It's a warning she can't bring herself to hear. After an encounter with Elliot Fletcher, Celeste becomes pregnant with his child and Mama starts to see this new baby as Celeste reborn...

In the second book, Black Cat, Celeste has spent two years dealing with the aftermath of her daughter's arrival. Baby Celeste is a charming toddler able to enchant anyone she encounters and Mama starts to see this as a sign that they should no longer be trapped solely in the house. When she gets into a relationship with the pharmacist Dave Fletcher, the father of the late Elliot Fletcher and grandfather of Baby Celeste, it all seems like life is starting to come together at last despite Celeste still forced to be Noble. But Dave's dangerous daughter Betsy proves herself to be a much more terrible person than her brother and tries to threaten both Celeste and Mama's livelihood. And in the aftermath of one terrible event, secrets start to unravel and Nothing Is the Same Anymore for not just Celeste but for everyone involved...

In the third book, Child of Darkness, Baby Celeste is now a teenage Child Prodigy who has spent much of her childhood in an orphanage after the events at the end of Black Cat. She is given a chance at another life with the wealthy Emerson family but the secrets behind it come at a cost that even a gifted child like her might not be able to pay. And then there's also the mystery that plagues her thoughts ever since she was a child: what happened to her beloved brother Noble that turned him into a strange girl named Celeste? And just what are the true secrets at the home she left behind?

No relation to the Platform Game released in 2018. Or to the French Web Game Celestus.