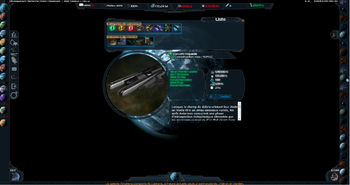 Yay, ships !
As Admiral Burlock said after destroying twelve allied colonies by accident: “We ain't going to get our panties in a twist”
– In-game crawl.
Advertisement:

is a French web original, browser-based, massively multiplayer online real-time strategy game set IN SPACE! – that is to say, an O-Game-like. Players are in charge of their Nation as they try to carve a piece of the galactic cake for their Faction. With it comes a Role Playing forum, where players can further elaborate their stories. A second server opened in 2015.

Long ago the dominant (and indeed only) civilization in the Amatens Galaxy was the Lanthanian Civilization. Saddened by their solitude, they decided to bring life everywhere they could. From that era are left countless garden worlds and Gates. Their downfall is a tragic story of love, as one grief-stricken scientist tried to revive his beloved thanks to Brain Uploading. That went... poorly, and soon the galaxy found itself threatened by giant automatic fleets led by an insane semi-artificial intelligence wanting to bring everything back to nothingness. The Lanthanians were totally outmatched. On the brink of extinction, they released an experimental super-weapon using their Gate network : Eope's Anomaly. The effects were instantaneous and destructive, as they made electricity non-fonctional for the next thousands and thousands of years. Civilization fell, as each world regressed to barbarism – many were not self-sufficient and did not make it. Eventually, after more than 17000 years of darkness, electricity came back, and with it the light of advanced space civilization. Wars and alliances were common place as each planet rediscovered its neighborhood. Time passed and stabilization came, giving us the current situation and the Seven Factions : The Thelios Federation, the Adrean Corporatist Republic (usually shortened to RCA), the Ducal Domains, the Zetran Dominion, the Amaranth Empire, the Leanth Circle and the Melrehns – which all have a backstory too long to be put here.

You start with a meager planet under your control, and have to work your way up from there by building massive fleets and dominating your neighboors. Or by teaming up and making alliances. Or just quietly mining and using your economical strenght to create vaste trade networks. Or supplying the warmongering with hardware. Or developing new technologies that will let you shape space itself. It is a quite complete gameplay, offering things not usually seen in this type of game like ground troops or in-flight interception.

The game is notable for the fact that it was written, developped, designed, coded, drawn, administrated and more generally made by just one guy – actively working on it since 2006. Said creator is – depending on whom you ask – a pure genius or an irate megalomaniac. Or both.

No relation to the 2018 Platform Game Celeste.