Music / The Kinks Are the Village Green Preservation Society 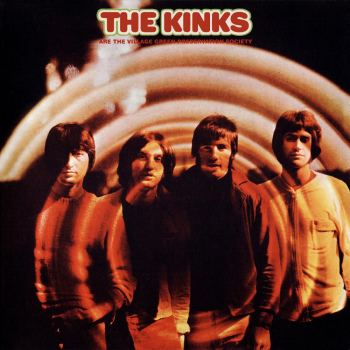 "God Save the Village Green."
Advertisement:

The Kinks Are the Village Green Preservation Society is the sixth studio album by The Kinks, released in 1968. A loosely connected Concept Album, it grew out of leader Ray Davies' reading of Georgian poets like A. E. Housman and memories of his own life. During the sessions for the band's previous studio album, Something Else by the Kinks, Davies had dismissed their producer Shel Talmy and produced the song "Waterloo Sunset" himself. Now he envisioned an entire album of songs he would produce in a lush-yet-unfussy style. To say that the immediate results were disappointing is an understatement. Reviews were mixed. Sales, by the standards of the time, were abysmal. However, in the ensuing decades it has come to be regarded by many as the band's masterpiece.

This album was their last with Pete Quaife; he left the band in early 1969 and was replaced by John Dalton, who had previously filled in for Quaife after a 1966 car accident.

God save TV Tropes and all the different varieties: