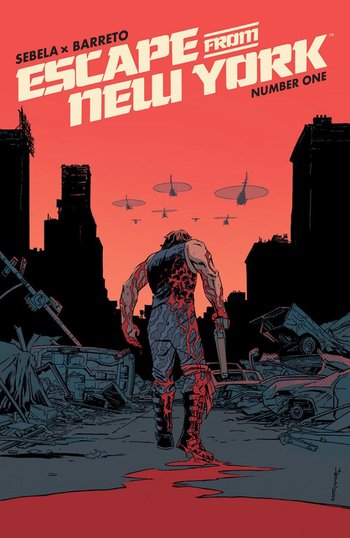 There have been several one-shot comics and stories related to Snake Plissken, the protagonist of the 1981 film Escape from New York and its 1996 sequel, Escape from L.A.. The longest-running and most-prominent of these offshoots is the 2014 comic series of the same name, distributed by Boom! Studios.

The series is comprised of four arcs that take place immediately following the conclusion of the first film, and cover a timespan leading up to the events of L.A.:

Additionally, a limited-series Crossover between the Escape from New York and Big Trouble in Little China franchises was produced by BOOM!, which ran for six issues and detailed an Alternate Continuity where Snake Plissken is transported into another world and must help Jack Burton and Wang escape from the authorities.

Non-BOOM! related comics included a one-shot story produced by Marvel Comics prior to the sequel, which followed Snake as he encountered a security robot programmed by the U.S. Police Force to track him down after a robbery, and a limited series produced by CrossGen, Snake Plissken Chronicles, where Plissken attempts to steal the car President John F. Kennedy was in the day he was assassinated in exchange for a $30 million payday.

The BOOM comic series contains examples of the following tropes: