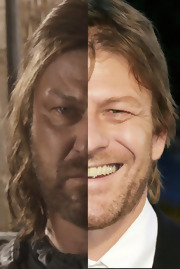 and Book 3: Sean Hits the Wall

is a very unusual Crossover Fic combining "real life" Sean Bean, Game of Thrones, and A Song of Ice and Fire.

After the last day of filming Ned Stark's scenes for the HBO series Game of Thrones, Sean Bean receives a present: an armor to "protect" him in his next job. He goes on a drinking binge to say goodbye to the other people he has met at filming, and when he wakes up the next day, he does so in White Harbor the same day Ned Stark is killed. Sean Bean must then act in the role of his life as the real Ned Stark, not only to bring Ned Stark's family back together, but also to bring peace to Westeros before the Others appear and the Long Winter begins.

Sean must use his wits, what he has learned in a lifetime of acting and every bit of knowledge he remembers from the books (passing it off as things the Old Gods have told him). His actions also change many things, preventing problems that happened in the books and TV series from ever taking place - such as marrying Robb off as soon as possible - yet causing other problems due to the changes. He has monologues about how different things are to when he did them in the series, such as when he mentally compares every person in Westeros to their actor or actress equivalents.

To be clear, Sean Bean is "from" the HBO series, but he's now "living" in the novels.