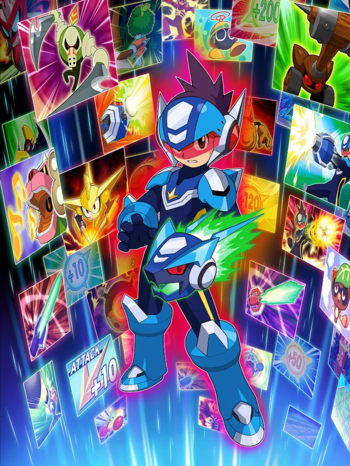 Taking place two hundred years after the events of Battle Network, it stars a young boy named Geo Stelar (Subaru Hoshikawa in the original Japanese), who lost his father after a journey to space and teams up with a rogue alien, Omega-Xis (War-Rock in the original Japanese version). By performing a Fusion Dance (in this series called "EM Wave Change"), the two transform into Mega Man, and they use their power to fight various threats. Quite literally (for the first game at least) Battle Network...In SPACE!

An anime adaptation of the series also aired but ended with an abrupt finale of the second season, Ryusei no Rockman Tribe, based on the second game. The English dub first premiered on Cartoon Network's Toonami block before moving online to Toonami Jetstream. Only half of the first season was released. No DVDs ever circulated in the United States or Japan, though the dub got a UK DVD release thanks to Manga UK. There was a manga serialized in Corocoro that loosely adapted the first and second games, and Ryo Takamisaki (of MegaMan NT Warrior fame) produced a promotional manga for Star Force 3. Neither of these were translated into English.

It has has an enhanced ROM Hack called Mega Man Star Force DX, which fixes up issues in the original game, adds in new quality of life features, restores cut content, and adds new post-game content. It has its own thread

at the Rockman EXE Zone Forum.