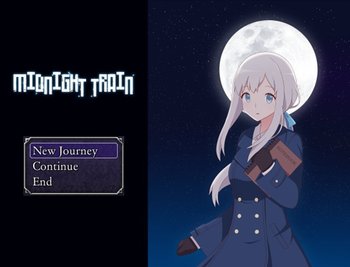 Step on the train...and all aboard!
Advertisement:

Midnight Train is an Western mystery/adventure game with horror elements by Lydia, the creator of Aria's Story, using RPG Maker VX Ace as its engine. The game is focused on exploration, story and puzzles. It's an episodic game, with four chapters in total.

Luna, a mute girl who communicates through sign language, is a traveler looking for a certain place. Suddenly, while she's travelling in the Midnight Express, people around her disappear and the train stops at a mysterious building in a black void. There, she finds a pocket watch with some instructions; she has three hours to find the next train before time runs out or she will be trapped in that world forever. Meeting up with wannabe detective Neil Lawton, who also has a pocket watch, and several other characters in the process who are also trapped and seek freedom, Luna must work with Neil to traverse the building, solve the many puzzles within, and escape from the clutches of the living Midnight Train.