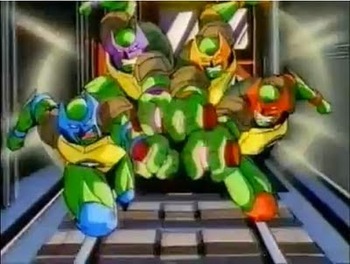 The Super Turtles from Episode 1.
Myūtanto Tātoruzu: Chōjin Densetsu-hen is an OVA produced by Ashi Productions as a tie-in for the Teenage Mutant Ninja Turtles toyline produced by Takara. It was made in 1996, and based mostly on the 1987 cartoon. As such, most of the voice work was done by the same cast as the TV Tokyo dub of the cartoon.
Advertisement:

Though it was never officially translated for the US, a fansub version exists on the internet.

There are two episodes;

These animated films provide examples of the following tropes: