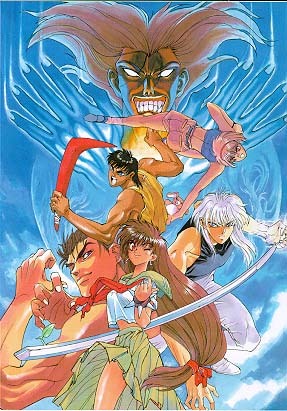 Every 3,000 years, a portal to the Demon World opens up, and demons are unleashed upon us. 3,000 years ago, a human-born Key named Kairei closed it. The Gateway District of Tokyo was built around it, and the residents were taught magic in order to be able to defend themselves.

Now, the portal is about to open again.

Meanwhile, Hazumi Jinno is your average schoolgirl save for the fact that she carries a large wooden sword and vies with her mother for the affection of her not-blood-related brother Takumi. And manages to beat the crap out of anyone who takes a peek at her panties. But Takumi turns out to be the reincarnation of Kairei, and soon, Hazumi is facing head remnant Kijima Touta. As well as dudes with guns for necks, a stereotyped Parisian and a seductress whose hair at one point sprouts flowers.

Think of this as a shoujo anime version of the later Buffy Season 2 climax (portal to hell threatens all life on earth, heroine carries a lot of wood on her—and, at one point, destroys several classrooms, heroine's beloved turns out to be the key to the portal...)