Failure is now an option. 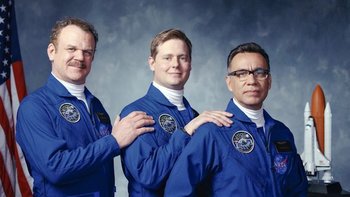 L-R: Cap, Rook, and Skip
Moonbase 8 is a space comedy series that began airing on Showtime on November 8, 2020. It stars Fred Armisen, Tim Heidecker, and John C. Reilly. The three stars created, wrote and executive produced the series alongside Jonathan Krisel (who directs each episode).
Advertisement:

Set in the isolated desert of Winslow, Arizona at NASA's Moon Base Simulator, Moonbase 8 follows eager astronauts Skip (Armisen), Rook (Heidecker) and their leader Cap (Reilly) as they attempt to qualify for their first lunar mission. While working vigorously to complete their training, a series of unexpected circumstances forces the astronauts to question their own mental sanity, trust in each other and whether or not they're cut out for space travel.

. This was followed by a full trailer

three days later. The pilot episode was made available for free on YouTube the day of the show's premiere, while the entire season was rolled out on-demand the same day, on the Showtime apps in the U.S. and Crave TV in Canada.