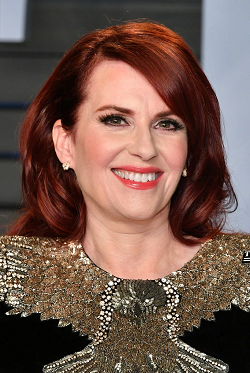 Megan Mullally (born November 12, 1958 in Los Angeles, California) is an American actress and comedian. She rose to fame as Karen on Will & Grace, and has since been known for roles in works like Childrens Hospital and Parks and Recreation. She's also a voice actor and a musician — she's in a band called Nancy & Beth.

Mullally married Nick Offerman in 2003. The couple have appeared together in works and have written a memoir about their love story entitled The Greatest Love Story Ever Told.