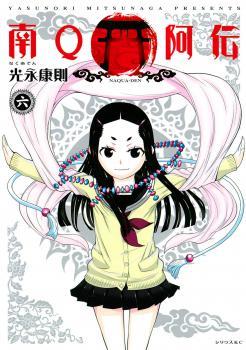 Naqua-Den is a spin-off manga from Princess Resurrection, starring Nakua, the spider-deity who was once an enemy to Hime, but eventually allied with her after a few defeats.

The story focuses on a teenager named Kanda Taro, who when he was little buried one of Nakua's servants, Taromaru. The servant wasn't dead, but was critically injured after a battle with an unknown foe. He asked Taro if he could recover within him, which Taro allowed. In the present time, Nakua has managed to find Taro, and recruits him into various activities which often sees the two trying to appease and purify various deities who could potentially bring harm to humans.

The manga has the following tropes