Film / The Call of the Cumberlands 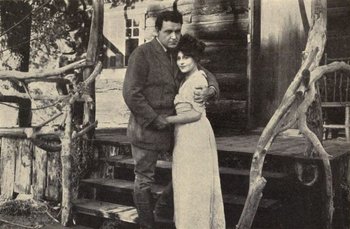 The Call of the Cumberlands is a 1916 film written by Julia Crawford Ivers and directed by Frank Lloyd.note Some sources dispute this and attribute the direction to Ivers.

The Souths and the Hollmans are feuding families in the Cumberland Mountains of Appalachia. A longstanding history of violence between the two has recently been ended by a very shaky two-year truce. Samson South, basically the heir apparent of the South clan, is not all that interested in feuding, being more focused on his girlfriend, distant (well, hopefully distant) cousin Sally Miller.

Samson is different from all the other hillbillies of the area in another way: he likes to draw, and he's quite good at it. Fate intervenes one day in the person of George Lescott, a New York artist in the area to paint the natural beauty of the Cumberlands. When George breaks his arm in a fall and has to rest for a while, he makes the acquaintance of Samson. After seeing Samson's natural artistic gifts George invites him to New York to study, much to Sally's displeasure. Meanwhile, the barely contained hostility between the two clans continues to seethe.