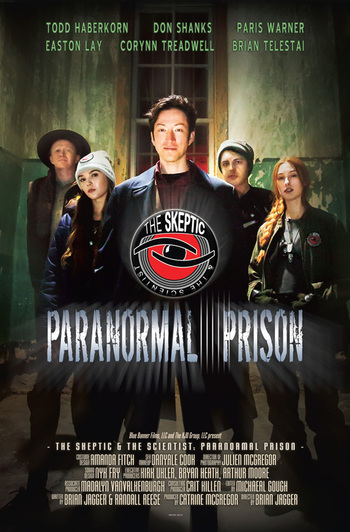 Matthew (Todd Haberkorn) and Sara (Paris Warner) are the hosts of an online paranormal investigation show called "The Skeptic and the Scientist". For their latest episode, they and their crew, Ashly (Corynn Treadwell) and Jacob (Brian Telestai), will be the last crew to film inside an Idaho prison that's due to be demolished soon because of structural concerns. Said prison's most significant events were a prison riot that happened in 1939 that lead to the deaths of three guards, and another one that lead to the prison's closure in 1973. What's more, its most infamous prisoners included a suffragate Serial Killer named Mary Beth Flake, and another one named Black Wolf, who now has a cell decked out with a mannequin.

Anyway, the plan is simple enough. Set up some cameras, walk around the building, record some stuff, etc. Good thing that they got Park Ranger Shtog (Easton Lay) with them to show them around. Of course, in movies like this, it's apparent what's going to happen.

Alright, my friend. We are finally free to go.