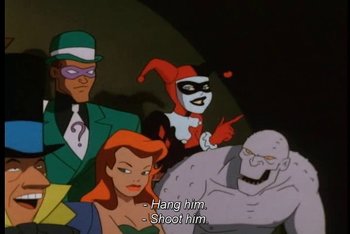 ''Hit him with a rock!''
Advertisement:

It's an excellent day for our villain and/or his menagerie of Mooks. After countless attempts he has finally captured Bob but the question remains: What are they going to do with him? Naturally the group starts making suggestions:

Carol: I say we tar and feather him!
Dan: I say we chop him to bits!
Eva: I say we cut off his feet!

For added comedic effect, the hostage may obscure their voice and add "I say we let him go!" An action of this sort is very fitting given that these types of scenarios are Played for Laughs more often than anything else. Note that this trope refers specifically to instances in which the fate of a captive is being decided by the group that has captured them and that said suggestions are given verbally or using body language. If the villain merely ties the captive up and leaves a suggestion box for his minions to slip paper in, it doesn't count. Also note that this trope is not about using any set of exact words.