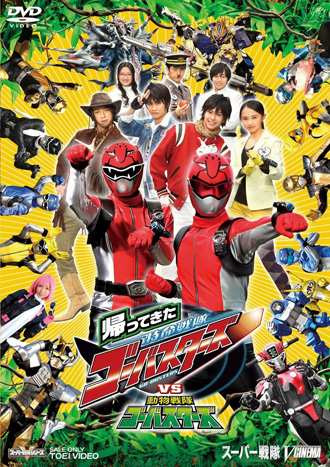 The Tokumei Sentai Go-Busters entry in the "Returns" series of post-season Super Sentai V-cinemas. Unlike other Returns movies, this one takes place during its corresponding series (specifically between episodes 44 and 45).

The Go-Busters are enjoying a peaceful New Year when a new enemy appears and subsequently kills our heroes. However, Cheeda Nick wakes up in heaven and is granted a wish by God to save his friends by making it so the Messiah Incident never happened.

Nick wakes up in a parallel world where Hiromu's parents are alive and well, and Hiromu himself is preparing for his first day as a student teacher at the Energy Management Centre's Agricultural High School. Yet it does not take long before an invasion by the evil Machine Empire forces Hiromu and a host of very familiar faces to be strong-armed into the Animal Sentai Go-Busters, a secret team of superheroes dedicated to protecting animals around the world from extinction!

The V-Cinema is ultimately a parody and rebuttal to the common criticism of Go-Busters being "not a real Sentai". As a result, it's a deliberate Cliché Storm of Super Sentai tropes that Flanderizes the entire cast and gets rid of any semblance of realism or originality the show attempted to introduce. Silly catchphrases, wacky commanders and stock plots abound as the V-Cinema races through a hypothetical 50-episode season of Go-Busters where creativity was put out to pasture.