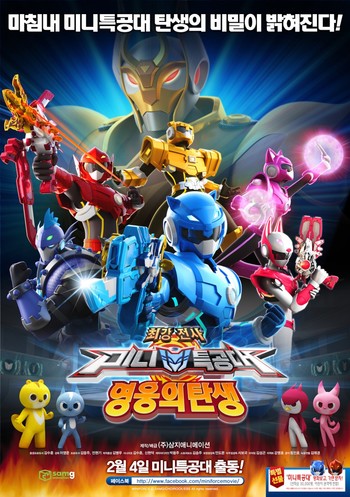 Miniforce: New Heroes Rise (original Korean title: 최강전사 미니특공대: 영웅의 탄생, Choegang Jeonsa Mini Teuggongdae: Yeong-ung-ui Tansaeng, literally “Strongest Warriors Mini Commando Squad: The Birth of Heroes”) is an animated film created by SAMG Animation and originally released on February 4, 2016 in South Korea. It is based on the Miniforce animated TV series, and serves as a movie-length Prequel to the show. Just like the show it is based on, the movie takes on a Sentai style approach to its action.

The movie follows the Miniforce’s members Volt, Sammy, Max, and Lucy, as they face the threat of the Lizard Army, who have made off with Ellinium stolen from a lab they destroyed, and are after the Controlling Cube as a part of their conquest for ultimate power. It's all up to the Miniforce to foil the Lizard Army's evil schemes and save the day. But as time will prove, not everything is as it seems.

. It is also available to view on Netflix as well.