Literature / Please Don't Tell My Parents I Blew Up the Moon 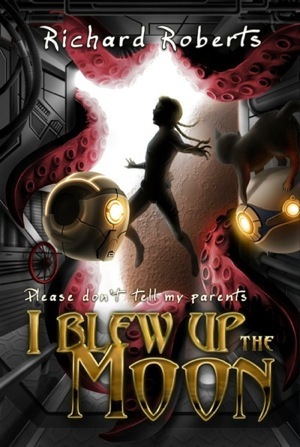 The sequel to the best-seller Please Don't Tell My Parents I'm a Supervillain by Richard Roberts.

Penny and her friends are back in school, and finding themselves extremely bored without any supervillainy. While Penny distracts herself with wondering which of her classmates have powers, it's not really working. Thankfully, Spider comes up with a mission for them: She has detected a human transmission from the moons of Jupiter, farther than any human has ever gone. She wants Bad Penny to build a spaceship and investigate. The result is a red catfish bioship that carries the team to the stars.

Once they reach Jupiter, they quickly discover that it's nowhere near as uninhabited as they thought. There are colonies on most of the major moons, descendants of mad science refugees from World War II. They have a society built on impossible technology, trawling alien fish, and complete subservience to a breed of robots called automatons. Not to mention the extremely dangerous Puppeteers, and this one moon that could really use blowing up...