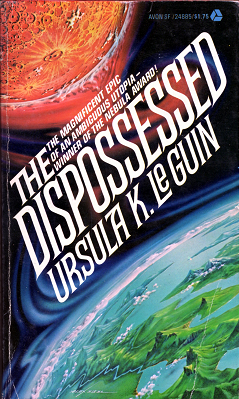 A 1974 Science Fiction novel by Ursula K. Le Guin. Subtitled An Ambiguous Utopia, it tells the story of Shevek, a brilliant physicist from the planet Anarres, traveling to the world of Urras to complete his work on the theory of time, which would make instantaneous interstellar communication possible. The planet Anarres, arid and barely habitable, was colonized by refugees from Urras who established an anarcho-syndicalist society there. Urras, by contrast, is a lush, rich world but the two superpowers on the planet, A-Io (capitalist) and Thu (state-socialist), are in a state of cold war. The even-numbered chapters describe Shevek and his family's life on Anarres while the odd-numbered chapters tell the story of his adventures on Urras.

As the story goes on, Shevek comes to realize that his society is beginning to stagnate and the 'permanent revolution' envisioned by its founders is grinding to a halt. Informal power structures are beginning to exist where there were none, an Obstructive Bureaucracy is starting to form, and some people are gradually falling into reactionary close-mindedness, traditionalism, and proto-nationalism. He and some of his friends form an initially-small movement, the 'Syndicate of Initiative', to try to keep their society true to its anti-authoritarian principles; Shevek eventually returns to his home at the end of the book to rejoin this movement, which turns out to have grown steadily in his absence.

The novel won both the Hugo and Nebula Awards.

Tropes appearing in The Dispossessed: