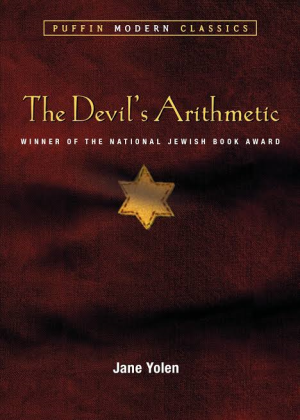 "You are a name, not a number. Never forget that name, whatever they tell you here. You will always be Chaya—life—to me."
Advertisement:

The Devil's Arithmetic is a 1988 Historical Fiction novel by Jane Yolen about a teenaged Jewish girl named Hannah Stern, who is transported through time to a 1942 (1941 in the film adaptation) German concentration camp in occupied Poland as Chaya/Chana Abramowicz. Hannah goes from being disrespectful of Jewish beliefs to realizing the importance of remembering after seeing the horrors of the time.

It was adapted into a Made-for-TV Movie starring Kirsten Dunst and Brittany Murphy in 1999. The movie was produced by Dustin Hoffman, who gives an introduction on the subject matter.