Literature / The Fall of the Sea People 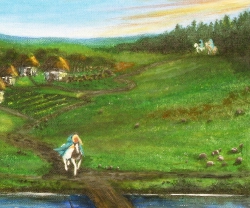 Arcadia: if you look closely, you can see the sheep
Advertisement:

The Fall of the Sea People is an epic fantasy series by Henry Hallan. The first volume, Venus and the Sea People, sees a singer return from life at The City to her home village nearly nine hundred years after she departs. She is befriended by two local girls, who persuade her to take them to the City. The rest of the first volume follows the rise to power of one of those girls, and ends on a cliffhanger.