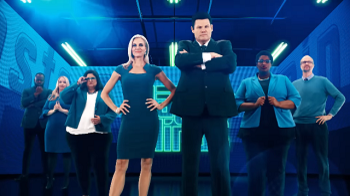 Do you have what it takes to beat the best?* From left to right: Jonathan Corbblah, Arianna Haut, Muffy Marracco, host Brooke Burns, Mark "The Beast" Labbett, LaKedra Pam, Ryan Chaffee.
Master Minds is a Game Show on GSN in which three contestants face off against a set of three resident trivia experts for a chance at $10,000 and, eventually, a spot on the show as a Master Mind themselves.
Advertisement:

The series debuted on June 10, 2019, as Best Ever Trivia Show and was originally hosted by Sherri Shepherd. The resident trivia experts included Ken Jennings, Muffy Marracco, Jonathan Corbblah, Ryan Chaffee, Arianna Haut, Raj Dhuwalia, Susannah Brooks, and David Suchinsky. In this version, contestants and experts secretly locked in answers to multiple-choice questions over three rounds. The winning contestant faced off against the best-performing expert in the Ultimate Trivia Challenge, a five-question showdown. If the contestant beat the expert, they won $10,000 and got to play again. A contestant who beat the experts three times was invited to play as an expert themselves in future shows.

The series was renewed under the title Master Minds and debuted under this new title, with a new format, on April 6, 2020, with Brooke Burns replacing Sherri Shepherd as host. Jennings, Marracco, Corbblah, Chaffee, and Haut all returned as experts (now called "Master Minds"), along with newcomer LaKedra Pam. The third season under the Master Minds title replaced Ken Jennings, who was now too busy with Jeopardy!, with The Chase favorite Mark "The Beast" Labbett. The format was also retooled further, the biggest change being that it now only takes two bonus round victories to become a Master Mind.