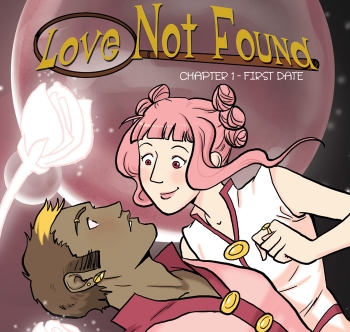 The Planet Monotropa is advertised as a "nature lover's paradise", with a population of only a few thousand humans. Despite unimaginable advances in technology, humankind has regressed to the point where they no longer engage in physical contact save by accident.

Enter our heroine, Abeille, who leaves work one day and accidentally collides with a man. Stirred by feelings that the physical contact aroused in her, she begins to crave an actual relationship with a real person.

Premiered June 4th 2014 after Demon Aid's cancellation, Love Not Found is another webcomic by Red String author Gina Biggs. The series uses a limited color palette, mostly dominated by shades of pink with dashes of spot color to emphasize differences in skin tones and contrast. Its debut came with a ten-page update, after which the series settled into a regular three-updates-per-week schedule. It is currently hosted at its official website

on the Hiveworks network.

Love Not Found contains examples of: