Literature / The Road to Oz 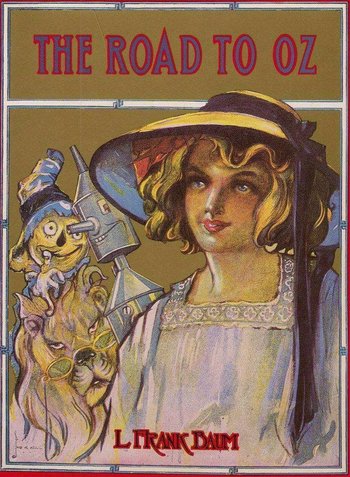 The Road to Oz is the fifth book in L. Frank Baum's Land of Oz book series, published in 1909 and featuring Dorothy's fourth visit to the mythical land of Oz.

The story begins with a homeless vagabond called the Shaggy Man wandering past the Kansas farm where Dorothy Gale lives. He asks for directions, and while Dorothy is showing him the way, Dorothy turns to walk back home only to be surrounded with dozens of roads. They can do nothing else but pick one and see where it goes. Along the way they meet a boy named Button-Bright and later encounter Polychrome, the Rainbow's daughter.

They eventually realize they have been transported to the same fantasy continent that Oz occupies. The travelers visit a city of foxes and a city of donkeys, whose leaders ask Dorothy to invite them to Princess Ozma's birthday party. They meet the Musicker and the Scoodlers and eventually, with the help of Johnny Dooit, cross the Deadly Desert into the Land of Oz. There they participate in a large celebration of Princess Ozma's birthday, attended by a large cast of characters, some from Baum's other fantasy works unrelated to Oz.