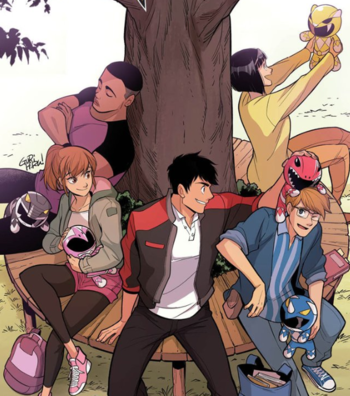 Taking a cue from other fanfics like Ultimate Power Rangers, All-Star Power Rangers is an Alternate Universe Fic of Power Rangers that takes cues from every adaptation of the titular rangers (along with some Super Sentai mixed in there) to create one giant Ultimate Universe. The story is written by Officially Fuzzy and can be viewed ​here

The intention of the story is (supposedly) an attempt to try and streamline much of the expansive lore and characters of the franchise in order to deliver a more satisfying experience for both older fans and for newer audiences, after feeling the series failed to do so for years.

The story began its first Story Arc with its first chapter releasing on March 25th, 2021, which covers the introduction of the first team of rangers (Jason, Trini, Zack, Kimberly, and Billy), Zordon and his war on evil, Rita Repulsa and her intentions to conquer the planet, and establishing the Morphin Grid itself.