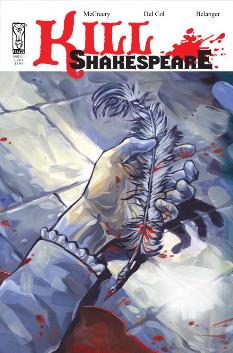 Looks like a lighthearted and cheerful romp to me!
Advertisement:

Kill Shakespeare is an innovative Graphic Novel series that has often drawn comparisons to Fables, and is set in a world where many of the Bard's characters exist at the same time and interact with each other.

The story begins in Denmark, where Hamlet is in the midst of his attempt to avenge the death of his father, who was murdered by none other than his uncle Claudius. After accidentally killing Polonius, Hamlet is sent away from court as per the plot of the play, carrying his Please Shoot the Messenger missive. And that's where things start to change from what you know.

On board the ship (the Antonio), Rosencrantz tells Hamlet that he and Guildenstern read the missive. Rosencrantz offers their support in Hamlet's attempt to win back his father's throne, but the death of Polonius and the visions that have been haunting Hamlet since just before they left Denmark have left him questioning his actions and even his sanity. Hamlet's brooding is cut short when a group of pirates attack, and despite resisting, the crew of the Antonio and Hamlet's friends soon seem to be getting the worst of things. Hamlet is knocked overboard, and clinging to life he drifts to the shores of England, where he awakes in the palace of Richard III.

Richard befriends the younger man, and shows him the grand ambitions Richard has for improving England, and Hamlet quickly comes to believe Richard is a benevolent ruler. Furthermore Richard tells Hamlet that he knew of Hamlet's coming through prophecy; he says that he believes that Hamlet is "The Shadow King", a figure that Richard says will kill a powerful and elusive wizard whose zealot followers (who call themselves the Prodigals

) are behind uprisings and rebellion in Richard's realm. The name of the wizard? William Shakespeare.

To seal the deal, Richard takes Hamlet down to a secret room in his palace where Hamlet sees three Wyrd Sisters in Richard's service revive a sailor that had been killed in the fight aboard the Antonio. When Richard offers to revive Hamlet's father in the same manner, Hamlet quickly agrees and sets out to search the countryside with Richard and his soldiers. Along the way, Hamlet even starts to make a new friend: Iago. Not long after setting out, Hamlet winds up separated from the group in part thanks to Falstaff, who tells Hamlet that Richard and his ally Macbeth are cruel tyrants, and begs Hamlet to meet with the leaders of the Prodigals (Juliet and Othello) and make up his own mind.

Hamlet is reluctant, and he doesn't exactly hit it off with Juliet and company when he finally meets them (in no small part because they believe The Shadow King is destined to be a savior both to them and Shakespeare, and they were Expecting Someone Taller), but the longer that he spends around both them and the common people, the more Hamlet comes to wonder about his new friends. Plagued by his doubts and visions sent by the Wyrd Sisters to drive him along, Hamlet must soon make some very important choices, and perhaps change the fate of a nation in doing so...