Recap / Big Finish Doctor Who 038 The Church And The Crown 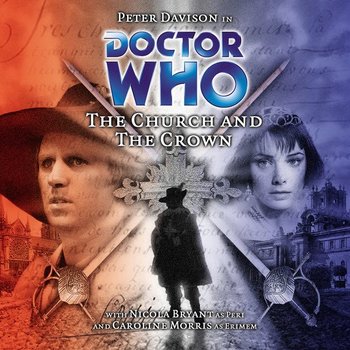 The Fifth Doctor and Peri plan to drop off new companion Princess Erimem at the Braxiatel Collection (home of Bernice Summerfield), but land in 17th century France instead, where skirmishes between King Louis XIII's musketeers and Cardinal Richelieu's guards are threatening the peace in Paris. Also, Peri immediately gets kidnapped by the English Duke of Buckingham, because everyone mistakes her for Queen Anne. As it turns out, Buckingham plans to invade France and start the British Empire a couple of centuries early.

Fortunately for the Doctor, this is actual realistic France, where Cardinal Richelieu is just a pretty okay guy and the Only Sane Employee. Even more fortunately, Erimem is extremely adept at exactly this kind of scenario, and bluffs her way into the court, holds a Rousing Speech to inspire the army, and even joins in the battle with her excellent sword fighting skills.

The Doctor decides that Erimem can stay and become a proper companion, although he's not thrilled to have her pet cat Antranak along.

"No Place Like Home" takes place immediately after this.