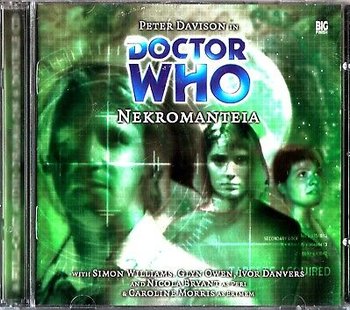 A markedly Darker and Edgier audio than most Big Finish stories. "Nekromanteia" is notable for garnering almost exclusively negative reviews, both for its script and for its production. Due to very iffy sexual themes and inscrutable sound mixing, it's considered the Dork Age of Big Finish, and its author was, at Peter Davison's request, never hired to write for Doctor Who ever again.

The Fifth Doctor, Peri and Erimem (and Erimem's pet cat Antranak) attend a bazaar on an alien planet, on Erimem's first trip into outer space. Whilst the Doctor is off meeting old friends of his, Erimem and Peri meet a sculptor who's being posessed to lure them into Nekromanteia.

Meanwhile The Corporation is suffering heavy damages from a cult of technically superior Witches, who cannibalize the survivors. The two survivors, Harlon and Cochrane, set out to finish their mission, and wipe out the planet's inhabitants, so that their family might live.

The TARDIS falls into a time distortion, and the Doctor and his companions stumble out of Nekromanteia. Harlon and Cochrane stumble upon them, mistake them for the Witches, and shoot Erimem and Peri. An emergency Transmat system takes the Doctor and Erimem to the Corporation's vessel, and Peri is considered dead.

In reality Peri's been taken by the Witches and being groomed to join their ranks. The Doctor and Harlon do a bit of recon, before the Doctor stumbles off and Harlon retreats to the vessel.

The Doctor encounters the source of the time distortion, a massive lodestone for psychic energies that came from sacrifice. He also encounters the Witches.They kill him.

As Peri gets rescued by an Adventurer Archaeologist, stark naked, Erimem comes to and fights off Harlon who tries to molest her. In an extremely uncomfortable cutaway we learn from Peri, who catches up with her, that he failed, and Erimem only suffered some bruises. It is then not mentioned again.

The Doctor, Only Mostly Dead, meets up with the entity who's driving the plot. Shara, a creature of pure thought, with mastery over time and space. He tries to entice the Doctor with his version of heaven; a cricket match from 2060, the first Olympic cricket match ever. The Witches catch Peri, Erimem and the archaeologist, and cut out the man's tongue.

In the meantime the head of the Mega-Corp, Marr, arrives on the planet and has his right hand shoot at the witches, and kill Cochrane. This destroys the lodestone which focusses all of the psychic energies obtained from the blood sacrifice, and threatens to wipe out the cosmos in a sea of chaos. Shara puts the Doctor back in his body before he died, and the Doctor talks his way out of being eaten for a second time. As Marr loses everything he's sacrificed his men for, Tallis promptly shoots him. Making Harlon the new executive.

The Doctor goes through a guidebook of the energy converter that was the lodestone, and finds out that if someone stands in it's place he can act as a host for Shara. The Doctor immediately offers himself, but gets interrupted by Erimem who sees this as her destiny, because she met the Doctor.

Her cat, Antranak, jumps in front of the energy and becomes Shara.

With everybody but Harlon and Tallis dead and the universe safe, the Doctor and his companions go back to the TARDIS, where Peri pressures the Doctor in getting Erimem a new cat.