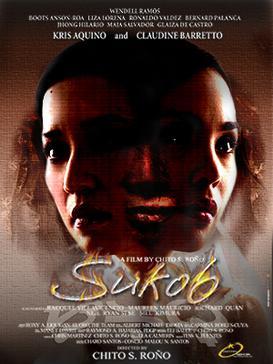 Sukob (English translation: The Wedding Curse) is a 2006 Filipino horror film directed by Chito S. Roño and starring Kris Aquino and Claudine Barretto. Sukob was considered as the highest-grossing Filipino film of all-time earning ₱203 million, until 2009 when it was surpassed by the romance film You Changed My Life.
Advertisement:

The film's premise is based on a Filipino superstition sukob in which one should not propose nor get married within the same year an immediate relative dies or marries.